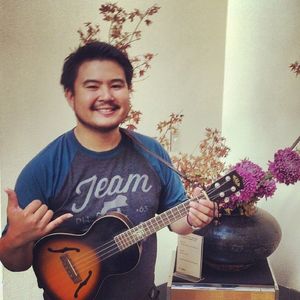 Lendl San Jose was born and raised in San Diego, and currently resides in the East Bay.  Growing up as a Filipino-American, he was driven by the love and support of his family, taking piano lessons from a young age, and learning guitar on his own, with help from his parents and two sisters.  He can blame his immersion into 80s pop music on his brother, who blasted music from Metallica to Tears for Fears in the adjacent bedroom.

During his younger years, he was continually “forced” to sing at church, family parties, karaoke nights, talent shows, Christmas parties, and the like.  We all know that Lenny was just really into performing.  As he began to mature, he started forming bands with his neighborhood friends, covering songs from Weezer, The Ataris, New Found Glory, Jimmy Eat World, Dashboard Confessional, Yellowcard, and other bands from the Punk/Pop/Emo scene.  He also wrote his own songs under the pen name “Phineas,” a reference to the book A Separate Peace by John Knowles.
He moved to the Bay Area in 2004 to attend University of California, Berkeley, graduating with a B.A. in Music and a Theatre minor in 2008.  His college career included playing Alto Saxophone for the Cal Marching Band, conducting the Pilipino Cultural Night Band and Choir, singing for the UC Gospel Choir, and performing in the comedy acoustic trio, The League of Pogi Gentlemen.  He continued to study at Cal State East Bay to pursue a teaching credential, taking a rigorous music education course, and completed his teaching credential in 2011.  During his time at CSU East Bay, he performed with the East Bay Singers, CSUEB Symphony Orchestra, and CSUEB Symphonic Band.
Lenny plays over 12 instruments, including Guitar, Bass, Ukulele, Violin, Cello, Flute, Clarinet, Saxophone, Trumpet, French Horn, Piano, and the 14-string Philippine mandolin, called the Bandurria.  Professionally, he has performed with Ray of Light Theatre (Baby, Jerry Springer: The Opera), Kularts (Pagbabalik, Ibig: Pulse of Desire, History of the Body, Piketlayn Cantata), SFArtsED (Fiorello!, Everything Goes: A Cole Porter Tribute) and Kawayan Folk Arts (Maria Makiling).  Musical projects and collaborations include The League of Pogi Gentlemen, The Bob and Lenny Show, and Cynthia Lin and the Blue Moon All-Stars.

Lenny's life was changed in 2009 upon taking a fellowship with Music National Service, where he met and worked with educator/performer, Robert Frazier.  From there, a musical relationship was formed by way of the Bob and Lenny Show.  Like good wine and food, Bob and Lenny made a perfect match and continue to play for well, wineries and other fancy places.  Mostly they do what they love most, which is play music for crowds that appreciate art.

After receiving his teaching credential in 2011, Lenny spent 5 years teaching in public schools.  He first taught choir at Oakland School for the Arts, and then moved on to teach instrumental music and guitar at the Berkeley Unified School District.

In 2010, Lenny decided to start a YouTube channel to post his covers and random musical musings.  When he posted a tutorial of Jason Mraz' "I'm Yours," he saw his following begin to grow exponentially.  Riding the wave of new ukulele aficionados, he continued to create more tutorials and release chord charts.  Over the years he has amassed over 60,000 subscribers worldwide, and countless ukulele friends in the Bay Area and beyond.  His YouTube following also earned him a spot as a Kala Brand Artist, creating content for the Learn to Play" program on the Kala Website.  With his sponsorship with Kala, he has been invited to lead ukulele circles at NAMM shows in LA and Nashville, the Ron Jon's Beach N Boards Fest in Cocoa Beach, FL, and on the home front, SF Uke-Splosion at Yerba Buena Gardens.

Currently, Lenny is a full-time working musician, sharing his love of ukulele with students and audiences alike.  He teaches students from ages 6 to 86, privately as well as in group lessons at the Albany Community Center.  He also performs at weddings, private parties, corporate events, restaurants, bars, street festivals, and everywhere where ukulele is accepted.

Lenny successfully married the love of his life, Angelica aka Jelly, in July 2016.  Jelly also plays the ukulele and sings beautifully, and will never admit it.  They currently live in Oakland with their lazy cat, Charlie, and their brand new baby girl, Aurelia.